The MexiCali Biennial is proud to announce that Daniel Ruanova will serve as Artist-in-Residence for its upcoming program The Land of Milk and Honey. Ruanova will work closely with California State University San Bernardino (CSUSB) Art and Design students and Associate Professor and MexiCali Biennial director Ed Gomez. The project will entail a series of Digital Art and Fabrication workshops and lectures, resulting in a kinetic sculpture titled The Mexican Labor Agreement, which will be part of Ruanova’s long-term and ongoing collaborative Bracero Legacy Project.

The residency is generously supported by a Community Based Research and Establishing Community Partnership grant from the Office of Community Engagement at CSUSB. This grant solidifies a continuing partnership between the MexiCali Biennial, CSUSB, The Cheech Marin Center for Chicano Art & Culture of the Riverside Art Museum, and the Garcia Center for the Arts. The project’s goal is to work with institutions to increase public awareness of issues around migration and labor by producing an inclusive community-based art project that focuses on art, history, and culture from the connected regions of California and Mexico. This project aims to provide students with a hands-on project-based learning experience by working with a practicing artist to produce a museum-quality art installation. The resulting sculpture will be exhibited at The Cheech as part of The Land of Milk and Honey, the MexiCali Biennial’s upcoming series of exhibitions and programs that explore broad themes of Agriculture in California and Mexico. 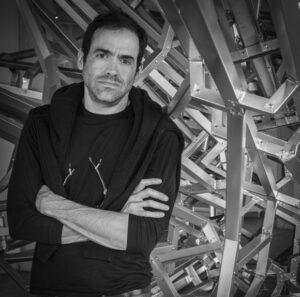 Daniel Ruanova is a self-proclaimed “border-rat” who lives and works between the borderlands of Tijuana and his land in Vallecitos, Baja California. He was co-founder of TJinChina Art Space in Tijuana and is currently a member of Sistema Nacional de Creadores de Arte. Ruanova has presented his work at, among others, the MOLAA Museum of Latin American Art in Long Beach, California; the Poliforum Siqueiros in Mexico City; MK2 Artspace by Caochangdi, Beijing; the Vasconcelos Library of Mexico City; the Moscow Biennale of Young Art; the Kunstraum in Cologne, Germany; the Tijuana Cultural Center; the Zacheta National Art Gallery in Warsaw, Poland; the Art Miami 07 fair; the San Diego Museum of Contemporary Art; the Los Angeles Municipal Art Gallery; and the Monterrey Center for the Arts. He has also received in 2009 and 2007 the scholarship for Young Creators from the National Fund for Culture and the Arts and in 2008 the scholarship for Creators with a Trajectory from the State Fund for Culture and the Arts of Baja California.

The Cheech Marin Center for Chicano Art & Culture of the Riverside Art Museum: Located in the heart of Riverside, CA, the “City of Arts & Innovation”, RAM is one museum with two locations: the Riverside Art Museum and The Cheech Marin Center for Chicano Art & Culture, slated to open May 8, 2022. RAM integrates art into the lives of people in a way that engages, inspires, and builds community by providing high quality exhibits and art education programs that instill a lifelong love of the arts. RAM’s desire to further engage and serve the community was the impetus to create The Cheech, a public-private partnership between RAM, the City of Riverside, and comedian Cheech Marin—one of the world’s foremost collectors of Chicano art. Marin’s gift of approximately 500 works by Chicana/o/x artists—among them Carlos Almaraz, Judithe Hernández, Gilbert “Magú” Luján, Sandy Rodriguez, Frank Romero, and Patssi Valdez—to RAM’s permanent collection makes the collection a repository for one of the largest holdings of Chicana/o/x art by a non-ethnic specific contemporary art museum. The Cheech is dedicated to showcasing Chicana/o/x art and honoring and exploring its continued social, cultural, and political impact through a comprehensive exhibitions program of the permanent collection and temporary exhibitions organized at the center, as well as nationally touring exhibitions that align with the center’s vision. The Cheech will work collaboratively with community partners to present thought-provoking educational programming that explores the complexity of Chicana/o/x culture not only through the visual arts, but in both music and film as well, recognizing that this art is evolving and expanding its definitions and parameters in response to current social conditions and in conversation with global artistic movements. For information about The Cheech, visit www.thecheechcenter.org. Find The Cheech on Facebook (www.facebook.com/thecheechcenter), Twitter (@thecheechcenter), and Instagram (@thecheechcenter).

The Garcia Center for the Arts strives to Sponsor, Promote and actively work to Sustain the arts in their community and the Greater Inland Empire region.

The MexiCali Biennial is a non-profit contemporary visual arts organization that focuses on the area encompassing California and Mexico as a region of aesthetic production. The organization is migratory in nature and showcases exhibitions on both sides of the California/Mexico border. The MexiCali Biennial was originally started as a project critiquing the proliferation of international and regional art biennials and as a result, may be shown at any time and at any location.